A picture is worth a 1000 words…but the message may vary by culture!

All the trainings, workshops and programs that JCO has been conducting worldwide since 2006 always touch on the subject of communication in all its forms.

In this article, we will highlight the visual part of the cultural puzzle that one has to be solve when working with Japan and Japanese colleagues.

(In a previous post, we discussed emoji, which also come from Japan and might be interpreted differently depending on culture).

Japan is a culture that is extremely visually oriented both in language (in fact, Chinese and Japanese characters are derived from actual drawings) and in everyday and business life.

Almost all companies, organizations, regions or even events (like festivals, fairs and exhibitions) have their own mascots.

JCO is no exception as seen by our mascot “Pen-chan”,
who as a penguin guides learners through our brand new JCO E-learning programme in Japanese!

Of course, when a company advertises their brand in another cultural sphere it is vital to not accidentally evoke the wrong association. 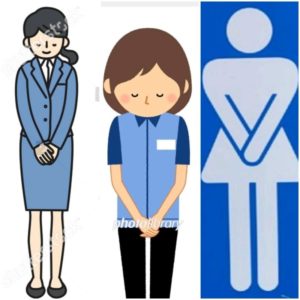 In the first one, we see 3 almost identical pictograms, which from a Japanese point of view typically refer to “friendly sales staff” bowing to the customer.

From a Western point of view, however, one of them clearly does not fit in, as it obviously used in a totally different field of business…
(In this case, it is the logo of a very well-known manufacturer of mobile toilets for construction sites or festivals)

It is therefore easy to understand that the use of a similar graphic (people bowing) is not recommended for a Western-style logo, website or ad campaign.

The 2nd example is about the (potentially apocryphal) case of an American fan of Japanese culture who proudly displayed the Japanese tattoo he wore on his arm to his new Japanese girlfriend.

He explained that he regarded himself a warrior too, as represented by the tattoo. Unfortunately, she had then to point out to him that the character shown on the tattoo would not mean “warrior/士”, but rather refer to “Earth/土”…all because of 2 wrongly placed brush strokes!

For laymen (such as the tattoo artist) the difference between the two is often not easy to discern.

According to this Urban Legend, however, the two got married anyway. These days, their Japanese relatives would affectionately simply call him “Doro-chan”, or in English “wet-earth-dude”.
(Disclamer:  JCO assumes no liability for the veracity of this story!)

As can be easily seen through these cases, when it comes to non-verbal communication (e.g. in advertisement and PR) any time spent on in-depth research is never wasted!

Learn more about efficient and effective communication in our online courses in many time-zones all over the world!

Why do many Japanese people have difficulty speaking and understanding English?
January 18, 2022

What my “Etch A Sketch party” taught me about Japanese high context communication
March 30, 2021

Why Is Reporting So Different in Japanese Companies?
March 10, 2021

Joint projects with Japan or, “How even monkeys, at times, fall from trees”
February 12, 2021

How do we use “san” when addressing a Japanese colleague?
January 16, 2021
Go to Top
We use cookies on our website to give you the most relevant experience by remembering your preferences and repeat visits. By clicking “Accept”, you consent to the use of ALL the cookies.
Cookie settingsACCEPT
Manage consent

This website uses cookies to improve your experience while you navigate through the website. Out of these, the cookies that are categorized as necessary are stored on your browser as they are essential for the working of basic functionalities of the website. We also use third-party cookies that help us analyze and understand how you use this website. These cookies will be stored in your browser only with your consent. You also have the option to opt-out of these cookies. But opting out of some of these cookies may affect your browsing experience.
Necessary Always Enabled

Any cookies that may not be particularly necessary for the website to function and is used specifically to collect user personal data via analytics, ads, other embedded contents are termed as non-necessary cookies. It is mandatory to procure user consent prior to running these cookies on your website.